Today is the birthday of the Marine Corps. The Navy and Marines (according to Wikipedia) were established together in 1775. The Marine Corps began November 10, 1775. They have been taking the hill and protecting us ever since. My dad was a Marine for 2 years. And yes, I was always told that you never say “he was a good Marine” until you are standing at his graveside after taps. then forevermore you can say it. My dear dad has been gone for more than 5 years already. My dad was a good Marine and a very good man. Today I honor him and thank him.

Operation Ooh-Rah is a non-profit that is doing something wonderful. Check it out! http://walworthcountytoday.com/news/2012/aug/10/support-troops-have-fun-operation-ooh-rah/

And now, without further ado, is a touching story, that I have seen before. It was also forwarded to me by operation ooh-rah. As a daughter of a Marine, it touches my heart deeply. As a friend to many current and former military people, and cousin, sister and sister-in-law to former Army and Navy and Air Force personnel, it touched my heart as well. Happy birthday Marine Corps.

A nurse took the tired, anxious serviceman to the bedside. “Your son is here,” she said to the old man. She had to repeat the words several times before the patient’s eyes opened.

Heavily sedated because of the pain of his heart attack, he dimly saw the young uniformed Marine standing outside the oxygen tent. He reached out his hand. The Marine wrapped his toughened fingers around the old man’s limp ones, squeezing a message of love and encouragement.

The nurse brought a chair so that the Marine could sit beside the bed. All through the night the young Marine sat there in the poorly lighted ward, holding the old man’s hand and offering him words of love and strength. Occasionally, the nurse suggested that the Marine move away and rest awhile. He refused.

Whenever the nurse came into the ward, the Marine was oblivious of her and of the night noises of the hospital – the clanking of the oxygen tank, the laughter of the night staff members exchanging greetings, the cries and moans of the other patients. Now and then she heard him say a few gentle words. The dying man said nothing, only held tightly to his son all through the night.

Along towards dawn, the old man died. The Marine released the now lifeless hand he had been holding and went to tell the nurse. While she did what she had to do, he waited.

Finally, she returned. She started to offer words of sympathy, but the Marine interrupted her, “Who was that man?” he asked.

The nurse was startled, “He was your father,” she answered.

“Then why didn’t you say something when I took you to him?”

“I knew right away there had been a mistake, but I also knew he needed his son, and his son just wasn’t here. When I realized that he was too sick to tell whether or not I was his son, knowing how much he needed me, I stayed. I came here tonight to find a Mr. William Grey. His Son was killed in Iraq today, and I was sent to inform him. What was this Gentleman’s Name? ”

The nurse with tears in her eyes answered, “Mr. William Grey………”

The next time someone needs you … just be there. Stay. 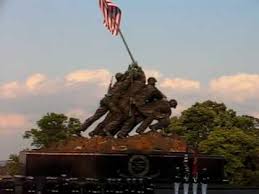 Story from our friends at Operation Ooh-Rah

I love to write, I love to talk, I love to uplift people when I can. I am a woman in love with life. I am a wife, mom, tutor, writer, and I am a perennial optimist. (OK not every single minute but you get the point! :-)
View all posts by Kate Kresse →
This entry was posted in faith/courage/miracles/hope and tagged Faith, Faith, inspiration, Marine Corps, touching story. Bookmark the permalink.