We Can Change the World With Kindness

Now we are past 9/11. The teensy break that some of the candidates took from negative, nasty politicking or ads will end today. Sniping will begin anew about which side is selfish or who cares about who more. Rather than fight I think it is important, oh so important, to take note of every single instance of kindness. It is essential to keep THOSE stories of good in the forefront. I am going to include a story I have posted before. It is about generosity. It is about a time when my son did something moving, kind, and loving for complete strangers out of the goodness and purity of his heart. 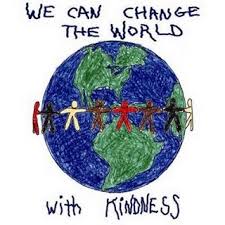 I know with certainty that everyone reading this knows similar stories. I know that you, yourselves, have done selfless, anonymous things to give to others. In the face of remembrance of cold-hearted cruelty on 9/11/01, we all saw good and giving things in the aftermath. When you feel discouraged, remember THOSE good things. Our lights shall NOT be extinguished. Ok –here is Josh’s kind gesture (if you have seen the following story before, you can skip it!)
~
Forgive me for sounding like I am bragging. My son has done some tremendous things over the years. I do not say this to brag. Rather, I offer it as counterpoint to the argument that “all of sociecty is selfish and self-absorbed. When my son was in the 4th grade he was getting taller. He was beginning to outgrow his first bike. We had told him he needed to save his money in order to purchase his own bike. The reasons behind that: to help him make a wise decision about how much to spend on the bike; to help him have a vested interest in being careful about taking care of his bike; and to teach him to wait for a purchase long enough to save up for it.

He became very interested in this project and started to notice the prices of bicycles in the ads. Whenever he received money (as a gift or in the form of his allowance) he would set most of it aside in a special place to accumulate money for his bike. He had pretty much decided on a bike that cost about $80. He had saved about $75 after close to 2 years.

One day he came home from school and explained that a doctor from Operation Smile had been at school and had given a presentation along with slides and a short film. The doctor would go to Central and South America every year with a team of doctors and nurses. They would provide free surgeries to poor families whose children had been born with cleft lips and/or cleft palates. These children had been bullied and ostracized. They had other difficulties because of these birth defects.

The next day, he did just that. he brought his money in and added it to the collection. His teacher contacted me at lunchtime to be sure we had approved such a large amount. We told her what josh had said, and that we were in full support of his generosity and compassion.

That summer, his generosity was rewarded. The family down the block from us hired him to take care of their pets while they were on vacation, and to be a mother’s helper and entertain their toddler when they weren’t on vacation. As a result, he only had to save his money up for a few months before he saved enough to buy his bike. he was so careful with that bicycle—and said that it was worth the wait.

So if you ever are feeling blue and thinking that the younger generation might be too selfish and not into community service, remember: my son is on the other side of that argument. My bet is that there are many others who have been generous, kind, and compassionate in their own ways.

That is one of the reasons that I am a perennial optimist!

Every day if you look around, you will see the good. You will see lives transformed.

I love to write, I love to talk, I love to uplift people when I can. I am a woman in love with life. I am a wife, mom, tutor, writer, and I am a perennial optimist. (OK not every single minute but you get the point! :-)
View all posts by Kate Kresse →
This entry was posted in Heartwarming or humorous stories and tagged bicycle, inspiration, kindness, Life. Bookmark the permalink.

10 Responses to We Can Change the World With Kindness